The production process involves different ingredients being mixed together that will result in colours that will make up the palette to be worked with. The first rule that must be taken into account is that in obtaining colours for the palette, it is necessary to forget the theory of subtractive colour synthesis and replace it with the theory of “generated colours” in pigmentology. In order to replace one concept with the other, a comparative table will be established. With this in mind, the well-known traditional colour theory will be replaced by a new theory, one that will be used in micropigmentation.

The chromatic star in pigmentology

The first concept we have to address is that of the classic chromatic circle, product of the “subtractive synthesis” theory, which will be replaced with the chromatic star:The educational tool resulting from the reformation of the classic “subtractive synthesis” into this new concept which uses different base colours as its starting point. These new base colours will be used in order to obtain different colours from the palette. These base colours are not part of the traditional colour wheel because black and white are not classed as colours.

The base colours in this concept are

The combination of all the above colours in different proportions will create brown.The chromatic star was designed by Goldeneye in 2008 to help simplify the manufacturing process and colour corrections.

For pigment manufacturing purposes black and white are used in this process, therefore the chromatic star helps simplify the explanation of the processing of eyebrow pigments as all of these colours are used to help create brown.

Brown is not a pure colour however, it is made up of different manufacturing ‘primary’ colours. Some of the ‘primary’ colours are more stable and last longer in the skin. For example, black and red are stronger and longer lasting than yellow and white, which means once the colour breaks down over time in the skin the colour can change. The chromatic star helps us identify how to colour correct by identifying the missing colour which we can then use to modify and correct the colour. 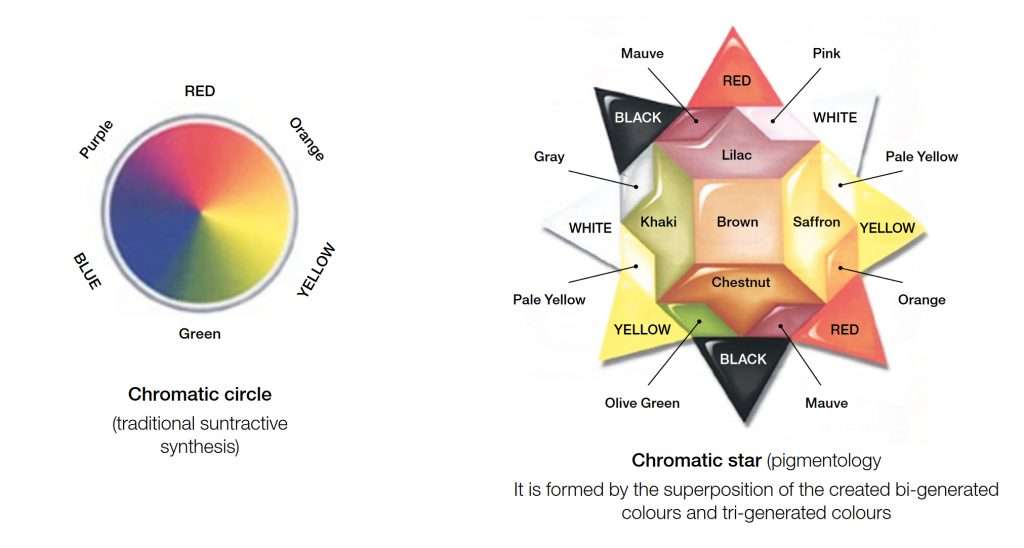 The second group of concepts that will be analysed is that of the formation of colours starting from certain base colours. In classic theory, the formation of the colour is called pigment colours (subtractive synthesis), we start from the so-called primary colours (red, yellow and blue) in order to obtain the secondary colours (green, orange and purple). In pigmentology colour theory, we start from a base of four “Primary colours”: black/grey black, red/reddish brown, yellow/mustard and white) in order to obtain the “secondary” colours (blend of two primary colours: pale yellow, apricot pink (hereafter called pink), terracotta orange (hereafter called orange), grey, burgundy to mauve and olive green or the “tertiary” colours: blends of three primary colours: beige-saffron, pink-lilac, khaki, chestnut. 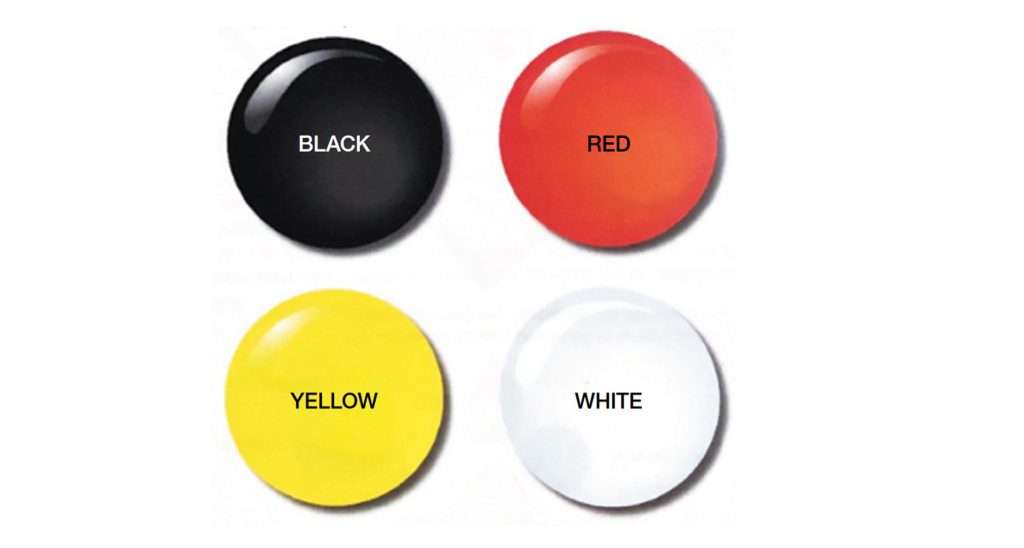 There are six secondary colours, obtained by mixing primary colours two at a time in equal parts, as shown in the following image: 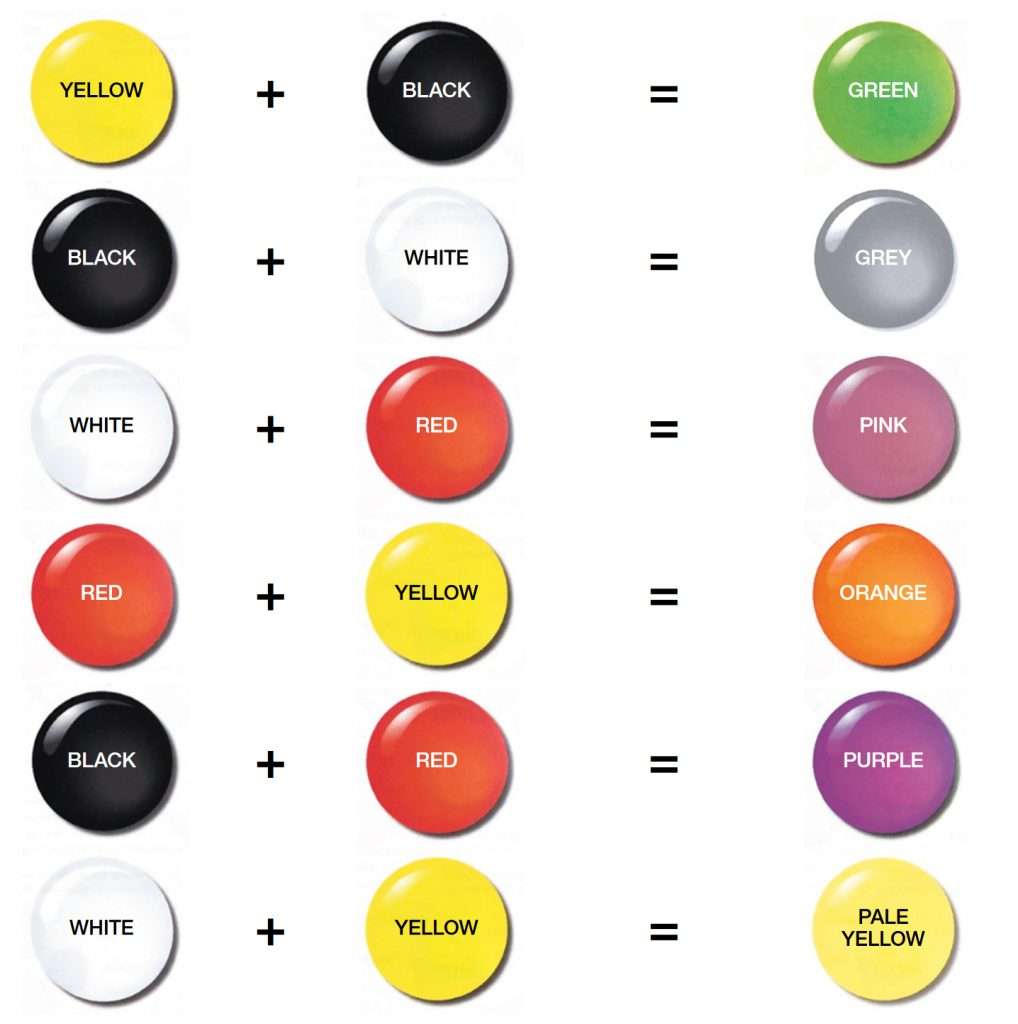 There are four tertiary colours, obtained by mixing three primary colours at a time in equal parts, as shown below: 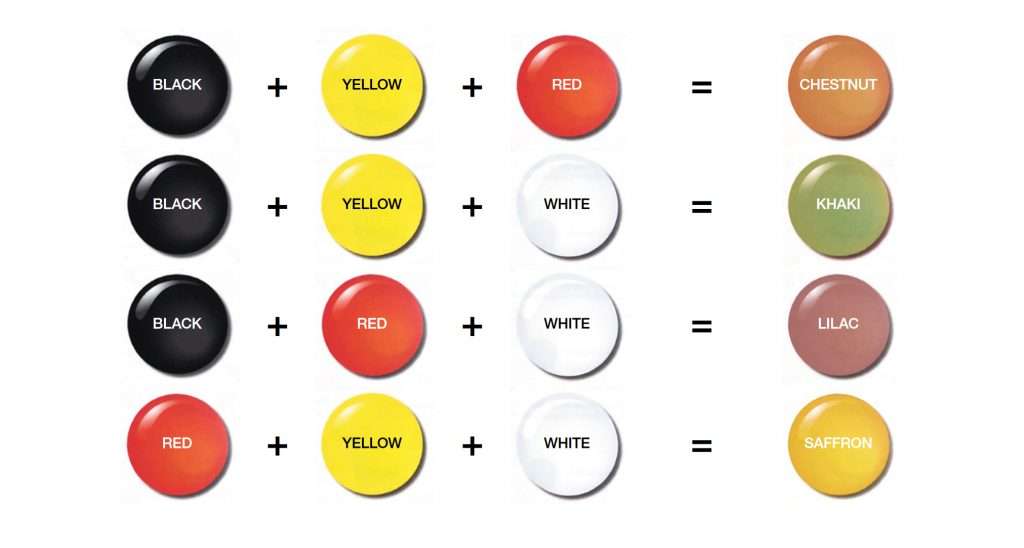 Finally, the theory of complimentary or contrasting colours in subtractive synthesis theory will be replaced by the “neutralising colours” used in pigmentology colour theory. While all the complimentary colours are divided up into the following pairs (blue/orange, red/green and yellow/purple); the neutralisers are also divided up into pairs of secondary colours (grey/orange, mauve/pale yellow, olive green/pink) or in tertiary colours with the missing primary colour (black/saffron, yellow/lilac, red/khaki, white/chestnut). It can be concluded that mixing the tertiary colour with the missing primary colour, neutralises together to give the whole range of possible shades of brown as a result, also known as ‘Quaternary colours’ in pigmented the colour theory. 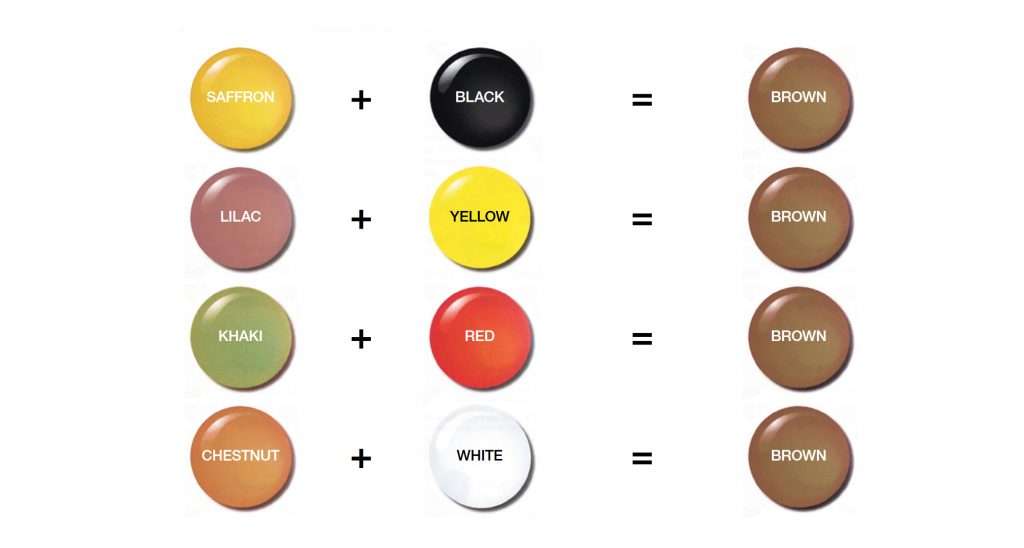 In theory the above explanations can help you carry out small colour corrections on eyebrows. Colours you may see in old brows are:

From your colour theory knowledge, you will now understand that the primary colour/s missing from the colour you see, is the colour you need to modify and colour correct the brow. Some colour corrections are quite complicated and should only be performed by advanced technicians. 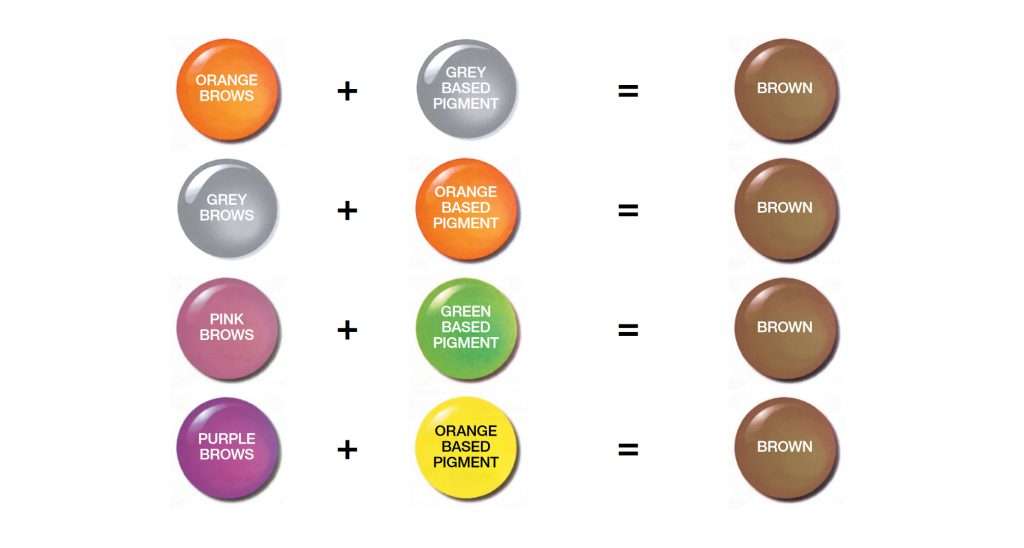 We hope you have found this post helpful; we offer practical Pigmentology and Colour Theory Master Classes; please get in touch for more information.

Search
Latest Posts
We use cookies on our website to give you the most relevant experience by remembering your preferences and repeat visits. By clicking “Accept All”, you consent to the use of ALL the cookies including data collection for ads personalisation. However, you may visit "Cookie Settings" to provide a controlled consent.
Cookie SettingsAccept All
Manage consent

This website uses cookies to improve your experience while you navigate through the website. Out of these, the cookies that are categorized as necessary are stored on your browser as they are essential for the working of basic functionalities of the website. We also use third-party cookies that help us analyze and understand how you use this website. These cookies will be stored in your browser only with your consent. You also have the option to opt-out of these cookies. But opting out of some of these cookies may affect your browsing experience.
Necessary Always Enabled
Necessary cookies are absolutely essential for the website to function properly. These cookies ensure basic functionalities and security features of the website, anonymously.
Functional
Functional cookies help to perform certain functionalities like sharing the content of the website on social media platforms, collect feedbacks, and other third-party features.
Performance
Performance cookies are used to understand and analyze the key performance indexes of the website which helps in delivering a better user experience for the visitors.
Analytics
Analytical cookies are used to understand how visitors interact with the website. These cookies help provide information on metrics the number of visitors, bounce rate, traffic source, etc.
Advertisement
Advertisement cookies are used to provide visitors with relevant ads and marketing campaigns. These cookies track visitors across websites and collect information to provide customized ads.
Others
Other uncategorized cookies are those that are being analyzed and have not been classified into a category as yet.
SAVE & ACCEPT